In a weird way, it’s nice to read a book dedicated to the broken bits of love and piecing them back into something that makes sense. Why We Broke Up is that book.

Anyone with a love story probably has a break-up story, too. That’s called the law of life. Or love. Or something. You can have one without the other; but more often than not, they come in pairs.

All the times I’ve sat and replayed the details of a break-up to my friends, or had them replay their own back to me, I’ve learned that there’s a point to it all other than having an excuse to openly cry to Boyz II Men. The emotional purging of memories, of the physical leftovers from a relationship is cathartic. Necessary, too. Heartbreak is universal, and while this might be a sad fact, it’s also a comforting one.

So it’s nice (in a weird way) to read a book dedicated to the broken bits of love. Even better when it offers a way of piecing them back into something that’s both beautiful and smart. Why We Broke Up is a novel written by Daniel Handler.  It’s the story of Min Green and Ed Slaterton, a couple who falls in love and eventually right back out again. Min writes a letter to Ed, and sends him a box of things she’s kept as souvenirs of their relationship, like the caps of beer bottles saved from the dinner party where they first met. The objects are illustrated in whimsical paintings by New York Times artist Maira Kalman. 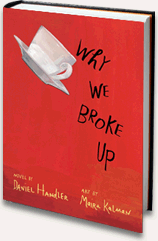 The book also exists online as a massive dumping ground for sharing your own stories. The project invite readers to submit their “Why We Broke Up” stories, with the hope that shared heartbreak will “reach critical mass”, and “never bother us again”. The stories span a range of sentiments, from the funny “She thought the name of the doctor on Doctor Who was Doctor Who”, to the simply chilling, “You thought you could never have me. When it turned out you could, you aspired higher”.

Just a warning: these stories are almost impossible to turn away from. Lock your door and put “End of the Road” on blast. It’s ok, we’ve all been there.