For those of you whose first sip of alcohol (other than, perhaps, the occasional sip of wine on holidays) was Zima, have I found the drink that will slip you back to those days of carefree summer nights (minus the fear of being caught with a fake ID).  Also perfect for those of you who just like uber-girly (and thus supremely yummy) alcoholic sips, NUVO, made with vodka, sparkling wine, and natural fruit nectar is an ultra-premium French sparkling liqueur infused with raspberry, peach, and strawberry for flirty, feminine, and fashionable summer cocktail.

Served in a champagne or martini glass, this classy cocktail is pretty, pink, and fit for a princess not even to mention how amazingly delicious it is. (Seriously, I don’t even really like alcohol and I LOVE it.)

Nuvo even gave us a list of amazing cocktails to make with their fabulous sparkling liqueur. (I’m getting ready to try them all.) 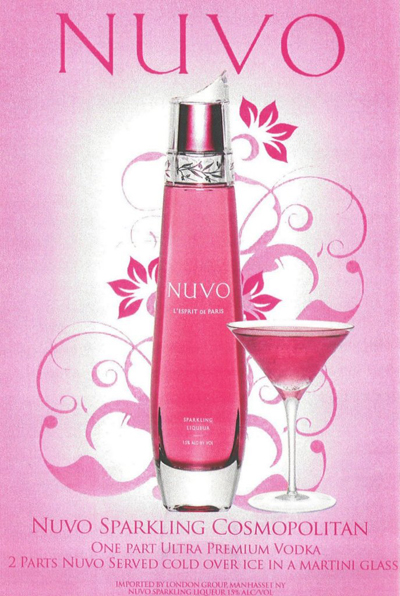 a twenty-something West Villager with her Masters from Columbia. She has an unhealthy obsession with ripped jeans (which she wears even when conventionally inappropriate), wishes Christmas decorations stayed up year-round (even though she is Jewish), and is in desperate pursuit of thick Brook-Shields-like eyebrows (which she was genetically denied). She loves anything with horses, is addicted to pilates, and could wander around Sephora for hours.