Is it even legal to drink while pregnant?

In the U.S., if you were to drink while pregnant, you would easily expect looks of horror from anyone sitting at the bar with you. People in America look at drinking while pregnant as being completely anathema or sacrilegious. You should be all about taking care of your baby’s health, not drinking, right? Well, not everyone in the world is as careful about drinking while pregnant as we are. In fact, in many parts of the world, pregnant mothers still drink regularly. The mindset in these other regions of the world are just different than the Western mentality, but are they wrong?

According to a study published in BJOG: An International Journal of Obstetrics and Gynecology, a bit of drinking during pregnancy isn’t actually bad for your child’s health. <our editor, however, has had 3 children and just ins’t buying this>

In this study, the researchers followed more than 1,600 pregnant women, monitoring their behavior–specifically in regards to their alcohol consumption. Once the mothers gave birth, the monitoring continued until the children reached the age of 5, when they were given intelligence, attention, and executive function tests.

When the researchers studied the data collected, they found NO significant difference between the intelligence, attention, and executive functions of children belonging to mothers who drank and mothers who did not. Whether the mothers drank occasionally or even went on the occasional binge, the alcohol didn’t have too much of an effect on the child’s health or brain functions.

What does this mean? Essentially, it means that drinking wine during pregnancy may not be as harmful for your child’s health as we once believed.

Doctors and obstetricians have always counseled AGAINST drinking, citing the strain that alcohol places on your body as well as the increased risk of birth defects and damage to the fetus. But, if this study proves anything, it’s that a few glasses of wine every week isn’t going to harm your child! 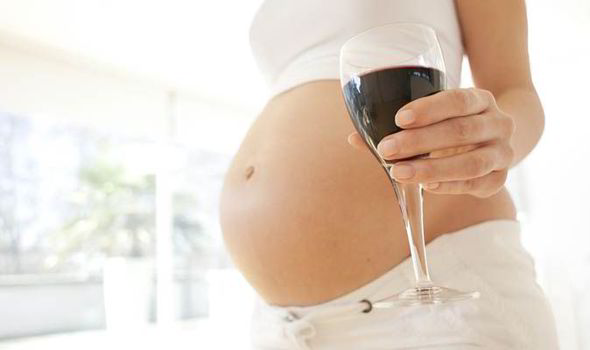 In another test, this one conducted in Australia, researchers examined over 3,000 women and the effects that alcohol had on their children. 11% of the children born to mothers who did not drink suffered from behavioral problems, and only 9% of children born to mother who drank occasionally had similar problems. The number rose to 11% and 14% as the drinking increased, but as you can see, the statistical difference is so small that it could simply be a random occurrence. There is only a minor difference between the children of mothers who drink and those who do not.

Another test conducted by the same team of researchers examined the IQ of children of both mothers who drank alcohol and abstained. A Raven’s IQ test was administered, and almost no difference was detected between the children of drinking and non-drinking mothers.

Now, that being said, science still has yet to determine EXACTLY what effect alcohol can have on a growing fetus. It is to be expected that alcohol–which essentially poisons the human body–will have some effect on the child, but what that effect is remains to be seen.

In Europe, the laws regarding alcohol consumption while pregnant are much less strict than in the U.S., though in some countries, there are strict laws. The International Center for Alcohol Policies has released information on its recommended drinking limits, advising mothers to stick within a certain amount per day–depending on their country.

However, with the discovery made by these two studies, the truth about alcohol and its effects on pregnancy may very well be in the spotlight once again. Who knows? Perhaps drinking while pregnant may not be quite as bad as we once thought…